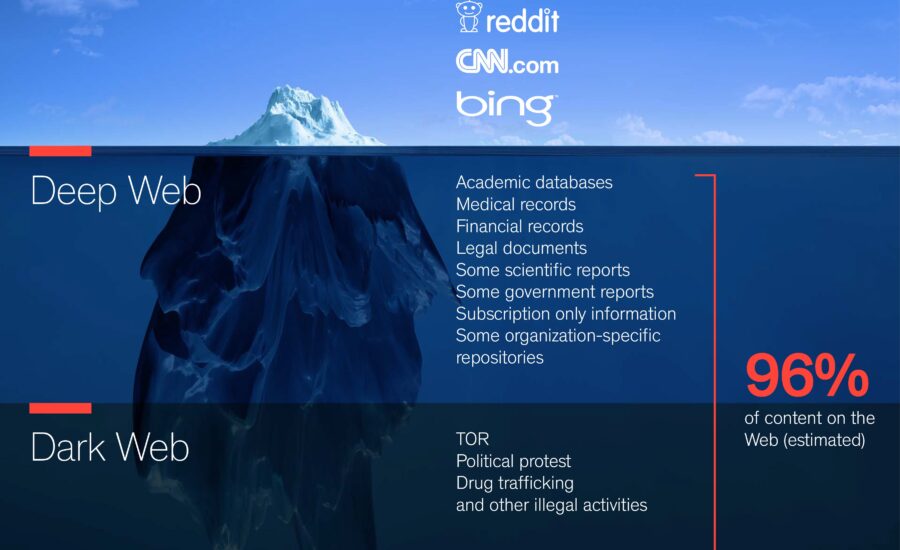 The open web, or surface web, is the “visible” surface layer. If we continue to visualize the entire web like an iceberg, the open web would be the top portion that’s above the water. From a statistical standpoint, this collective of websites and data makes up under 5% of the total internet.

All commonly public-facing websites accessed via traditional browsers like Google Chrome, Internet Explorer, and Firefox are contained here. Websites are usually labeled with registry operators like “.com” and “.org” and can be easily located with popular search engines.

Locating surface web websites is possible because search engines can index the web via visible links (a process called “crawling” due to the search engine traveling the web like a spider).

The deep web rests below the surface and accounts for approximately 90% of all websites. This would be the part of an iceberg beneath the water, much larger than the surface web. In fact, this hidden web is so large that it’s impossible to discover exactly how many pages or websites are active at any one time.

While many news outlets use “deep web” and “dark web” interchangeably, much of the deep portion as a whole is perfectly legal and safe. Some of the largest parts of the deep web include:

In case you’re wondering how to access the deep web, chances are you already use it daily. The term “deep web” refers to all web pages that that are unidentifiable by search engines. Deep web sites may be concealed behind passwords or other security walls, while others simply tell search engines to not “crawl” them. Without visible links, these pages are more hidden for various reasons.

The dark web refers to sites that are not indexed and only accessible via specialized web browsers. Significantly smaller than the tiny surface web, the dark web is considered a part of the deep web. Using our ocean and iceberg visual, the dark web would be the bottom tip of the submerged iceberg.

The dark web, however, is a very concealed portion of the deep web that few will ever interact with or even see. In other words, the deep web covers everything under the surface that’s still accessible with the right software, including the dark web.

Breaking down the construction of the dark web reveals a few key layers that make it an anonymous haven:

The reputation of the dark web has often been linked to criminal intent or illegal content, and “trading” sites where users can purchase illicit goods or services. However, legal parties have made use of this framework as well.

The dark web was once the province of hackers, law enforcement officers, and cybercriminals. However, new technology like encryption and the anonymization browser software, Tor, now makes it possible for anyone to dive dark if they’re interested.

Tor (“The Onion Routing” project) network browser provides users access to visit websites with the “. onion” registry operator. This browser is a service originally developed in the latter part of the 1990s by the United States Naval Research Laboratory.

Understanding that the nature of the internet meant a lack of privacy, an early version of Tor was created to hide spy communications. Eventually, the framework was repurposed and has since been made public in the form of the browser we know today. Anyone can download it free of charge.

Think of Tor as a web browser like Google Chrome or Firefox. Notably, instead of taking the most direct route between your computer and the deep parts of the web, the Tor browser uses a random path of encrypted servers known as “nodes.” This allows users to connect to the deep web without fear of their actions being tracked or their browser history being exposed.

Sites on the deep web also use Tor (or similar software such as I2P, the “Invisible Internet Project”) to remain anonymous, meaning you won’t be able to find out who’s running them or where they’re being hosted.